US Sen Graham voices gratitude for Turkey's efforts in Syria 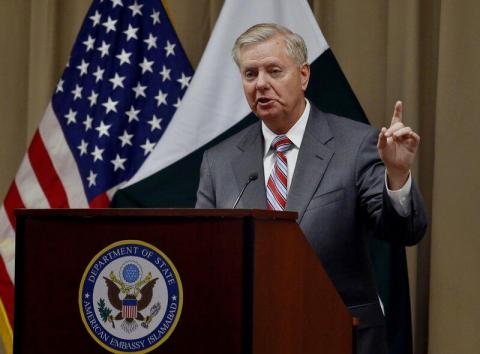 U.S. Senator Lindsey Graham on March 3 voiced appreciation for Turkey's efforts to thwart a Syrian regime offensive in northwestern Syria propped up by Russia and Iran.

"Very much appreciate what Turkey is doing to stand with the people of Idlib, Syria," Graham said on Twitter after more than 50 Turkish troops martyred in regime attacks in February. "It is time for the world, including the United States, to declare a no-fly zone over Idlib before the humanitarian crisis escalates."

U.S. President Donald Trump previously said that Washington is in talks with Turkish President Recep Tayyip Erdoğan about a request from Ankara for the deployment of the Patriot missile system along its southern border.

"We are speaking to President Erdoğan a lot. We are talking to him about" the request, Trump told reporters at the White House.

Currently, Patriots from Spain are deployed in southern Adana province.

Ankara on March 1 launched "Operation Spring Shield" after at least 34 Turkish soldiers were killed in Idlib, the last rebel stronghold in Syria.