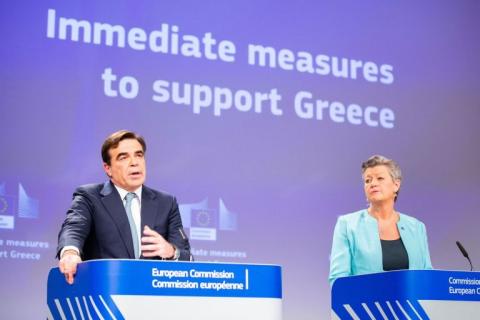 «When Europe is tested, unity prevails. Unanimous support to the EU Commission action plan for Greece by all EU Ministers in extraordinary JHA Council tonight. Full solidarity with Greece. A Europe that protects, a Europe that delivers."

He had declared earlier that the EU will not be blackmailed by anyone.

In their joint statement, the 27 ministers stressed that the EU rejects the use of migration pressure by Turkey for political purposes.

Croatian Interior Minister Davor Bozinovic, whose country holds the rotating EU Presidency declared, «Our message is clear: We are on Greece's side. Not just Greece, but any other EU member state that finds itself in a similar position can count on our support and solidarity.»

The European Commission has drafted a plan of measures to provide support to Greece in managing the extraordinary situation at the continent's external borders.

The measures include deploying an additional 100 Frontex border guards (in addition to the current 530), one aeroplane, one high-speed boat, and three thermal cameras.

Schinas maintained that the 3 March visit of the presidents of the European Council, Commission, and Parliament to the Greek-Turkish border at Evros sent a «resounding message of support" for Greece which is confronted with» an «unprecedented challenge».

The Council issued the following "Statement on...