Populists Shrug Off Protests in Central and Southeast Europe 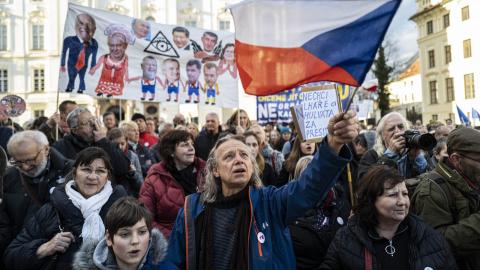 As in countries across the world, pro-democracy grassroots movements had little success in stopping assaults on independent institutions, the report found.

"While protest movements in every region have illustrated widespread popular demand for better governance, they have yet to reverse the overall pattern of declining freedom," Freedom House said in a statement.

In the Czech Republic, Freedom House cited the example of the biggest street protests since the Velvet Revolution triggered by Prime Minister Andrej Babis's decision last year to replace the justice minister with a close ally. The move raised "concerns that he was attempting to block criminal charges for his alleged misuse of European Union funds", the report said.

In Poland, it said legislative elections last October "laid bare the extent to which the ruling Law and Justice party had politically captured the state media, whose taxpayer-funded broadcasts leading up to the voting amounted to partisan propaganda".

Despite losing control of the Senate upper house of parliament, Law and Justice "redoubled its efforts to purge the judiciary at year's end", the report said.

And in the Balkans, authoritarian regimes continued to make it hard to hold power to account, it found.

"In Montenegro and Serbia, independent journalists, opposition figures and other perceived foes of the government faced ongoing harassment, intimidation, and sometimes violence," it said. "Public frustration with the entrenched ruling parties boiled over into large protests in both countries, but they failed to yield any meaningful change."