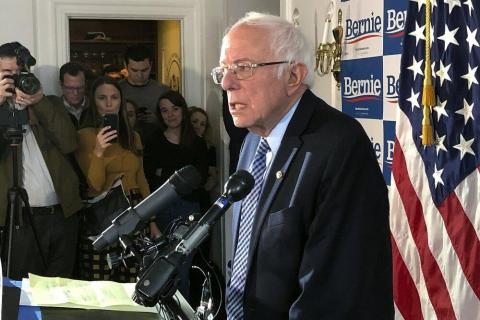 His front-runner status slipping, Bernie Sanders refocused his Democratic presidential campaign on surging rival Joe Biden as the Vermont senator's allies grappled with the fallout from a Super Tuesday stumble that raised internal concerns about the direction of his White House bid.

Sanders targeted Biden's record on trade, Social Security and fundraising just hours after billionaire Mike Bloomberg suspended his campaign and Elizabeth Warren confirmed she was privately reassessing her future in the race. The dramatic shifts on March 4 signaled that the Democrats' once-crowded nomination fight had effectively come down to a two-man race for the right to face President Donald Trump in November.

Sanders declared himself "neck and neck" with Biden as he faced reporters in his home state, Vermont, one of just four states he captured on the most consequential day of voting in the party's 2020 primary season. Biden won 10 states, assembling victories that transcended geography, race and class.

"What this campaign, I think, is increasingly about is, Which side are you on?" Sanders said.

The progressive candidate lobbed familiar attacks against the former vice president's record but ignored supporters' calls to be more aggressive and insisted his campaign would avoid any "Trump-type effort" that included personal criticism.

"I like Joe. I think he's a decent human being," Sanders said. "Joe and I have a very different vision for the future of this country."

Biden told reporters he would unify the country and, without naming Sanders, knocked the senator's frequent contention that he is beholden to an elite party establishment.

"The establishment are all those hard-working people" who voted on March 3, Biden told reporters in...