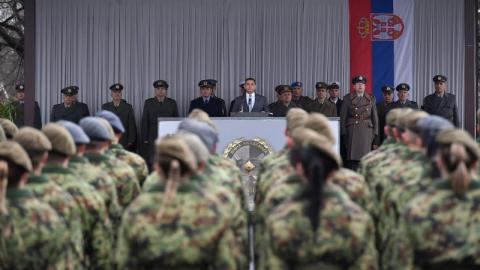 Low pay, negative selection in promotion, poor working conditions and the lack of training and development are prompting many staff to quit the defence ministry and the military in Serbia, a new report by the Belgrade Centre for Security Policy says.

The NGO that deals with security issues on Thursday, in its latest report, revealed why so many employees in the defence system of Serbia are leaving.

Besides analysing laws and rules, its researchers spoke with former members of the Serbian Armed Forces and defence sector employees.

The exact numbers of quitting are hard to estimate. The report noted a lack of precise publicly available information on the number of people who recently left the defence system of their own volition.

"Generally speaking, an average of 166 officers and 66 non-commissioned officers have left the MO [ministry] and VS [armed forces] over the past five years," it said.

Data on the number of people employed by the Defence Ministry and Army are classified but unofficial information says that there are some 32,000 employees in total.

Although the authorities often announce higher salaries and better conditions for defence personnel, the responders to this report said low wages remained a big problem.

The report noted problems like the cut in per diem allowances made in 2015, the "symbolic" monthly family separation allowance, travel expenses limited to sums that do not cover daily travel costs and the abolition of housing loans subsidies.

Another problem highlighted by the respondents...