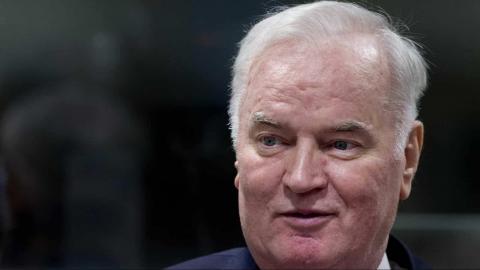 "He saw us. I saw him too. He raised his hand, he waved… They went off towards Potocari. I have never seen him again," she said.

Malagic has testified at four trials of Bosnian Serbs military and political officials at the International Criminal Tribunal for the Former Yugoslavia in The Hague - the cases against Radislav Krstic, Radovan Karadzic, Zdravko Tolimir and Ratko Mladic.

She is now awaiting the final verdict in Mladic's trial this month with particular attention, because she personally saw the Bosnian Serb Army commander in Potocari at the time of the massacres in July 1995.

"You know what it would mean if they pronounce him guilty. It would mean a big victory," she said.

She is one of thousands of people from Srebrenica who are anxiously awaiting the hearings set for March 17 and 18, at which the defence and prosecution will present their appeals in the Mladic case.

He was initially convicted by the UN court in 2017 and sentenced to life imprisonment for the Srebrenica genocide, terrorising the population of Sarajevo during the siege of the city, waging a campaign of persecution across Bosnia and Herzegovina and taking UN peacekeepers hostage.

The defence wants Mladic to be acquitted on appeal, while the prosecution is hoping that he will be further convicted of committing genocide in several other Bosnian municipalities in 1992.

But relatives of the victims of Srebrenica are worried that changes to the judging panel could have an effect on the verdict. The appeals chamber in the Mladic case is now being headed by judge Prisca Matimba Nyambe, who in a previous trial expressed doubt that the Srebrenica massacres constituted genocide.

Nyambe filed a separate opinion from the other judges in the case against...