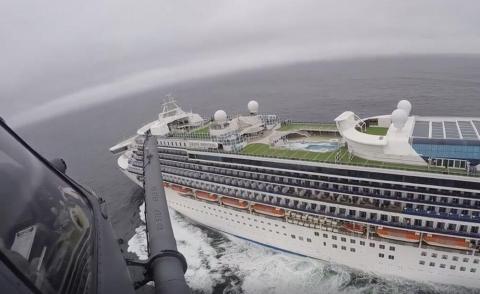 U.S. officials were deciding where to dock a cruise ship in California with 21 virus cases aboard and four American universities canceled in-person classes as sweeping efforts to contain the outbreak that started in China spread to the West.

The Grand Princess, with 3,500 people aboard, was in international waters off San Francisco late on March 6.

Authorities want it to dock in a non-commercial port for everyone aboard to be tested amid evidence the ship was the breeding ground for a deadly cluster of 10 cases during an earlier voyage.

"Those that will need to be quarantined will be quarantined. Those who will require medical help will receive it," said U.S. Vice President Mike Pence.

President Donald Trump, speaking at the U.S. Centers for Disease Control and Prevention in Atlanta, said he would have preferred not to let the passengers disembark onto American soil but would defer to the recommendations of medical experts.

Also on March 6, authorities in Florida reported the first two U.S. deaths away from the West Coast. They said the two patients were in their 70s and one had underlying health problems.

The University of Washington and two other universities said campuses in Seattle would hold classes online instead of in-person. Stanford University, south of San Francisco, announced similar plans.

Also in Seattle, Starbucks announced an employee of one of its cafes was diagnosed with COVID-19, the disease caused by the virus. The company said the store would reopen after a ...