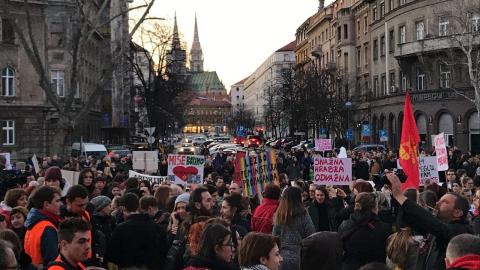 In the Bosnian capital of Sarajevo, the CURE (GIRLS) Foundation celebrated with an activist stroll, under the slogan "Bully, on your way!"

"The peaceful march is intended to draw attention to the problems facing women in Bosnia and Herzegovina and the world, and to give importance to mark International Women's Day," the organisers said in the invitation. At the same time, women in the southern city of Mostar organised a march under the motto "Give us back our vote!"

The women's march in Montenegro was held in the capital, Podgorica, under the slogan "Go away Fascism". This traditional march was organised by the NGOs Women's Rights Centre and Anima, and the central event was a protest walk from the central city square to the monument to Partisan fighters on Gorica Hill. "We are marching against fascism and its opposite - chauvinism, misogyny and nationalism," the organisers said.

In Romania, an event took place in Bucharest in front of the Cathedral of the People's Salvation, chosen by the Front Association as the place to celebrate its so-called Feminist Liturgy. The performance included a "feminist prayer" consisting of a "symbolic reinterpretation of the [Christian] creed" that decried the strong socially conservative influence of the Orthodox Church in Romania.

The organisers also condemned the Church's opposition to abortion and contraceptives, as well as its promotion of women's submission to men, which they called "an obstacle in the way of women's liberation from abusive relationships".<...