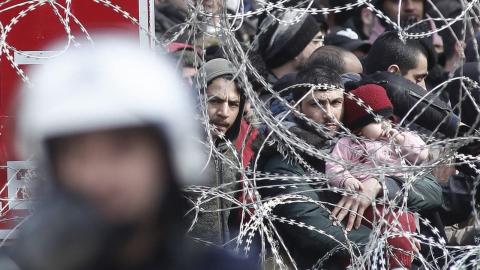 In a statement on March 3, the European Council on Refugees and Exiles warned against inflammatory language.

"Refugees seeking protection should not be treated as a security threat, with heavy-handed military tactics and language," the organisation said.

"We are alarmed at the hysterical and inappropriate language of political leaders: this is not a war; this is not an invasion."

Migrants and refugees near the Turkish-Greek border. Photo: EPA-EFE/ERDEM SAHIN.

In Croatia, which currently holds the rotating presidency of the EU, Prime Minister Andrej Plenkovic said Zagreb was considering deploying the army to reinforce 6,500 border police officers, already accused by rights groups of illegal 'pushbacks' of migrants and refugees trying to enter from Bosnia and Serbia.

"All this is just a possibility for now, a fallback plan," Plenkovic said after meeting NATO Secretary-General Jens Stoltenberg in Zagreb on Wednesday.

Croatia has also said it is ready to send a second police boat to the Aegean and border police officers to the Greek border. Bulgaria, too, says it has 400 soldiers on standby to reinforce the border, while neighbouring North Macedonia has increased army and police numbers on its southern border with Greece.

Visiting the southern border on Tuesday, North Macedonia President Stevo Pendarovski said there was no sign of an imminent "wave of people". Zoran Zaev, who recently resigned as prime minister ahead of an election next month, said authorities were in "direct communication and coordination with the foreign ministries of Turkey and Greece, as well as with NATO structures and the EU."