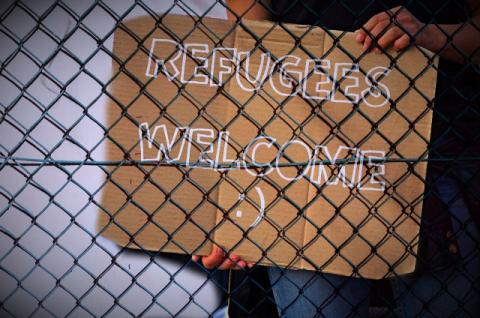 Bulgaria's defence minister has hit out at "unreasonable" Greek plans to build a camp near their border to shelter asylum seekers amid a migration surge from Turkey, AFP reported, quoted by various media including Focus News Agency.
"The accommodation by the Greek side of illegal migrants near our border is a pre-requisite for building up of additional tensions. This is not good-neighbourly and is unreasonable!" Krasimir Karakachanov posted late Monday on Facebook.
The comments came after Greek migration minister Notis Mitarachi announced over the weekend that Athens wanted to build two closed centres in the northern region of Serres that borders Bulgaria and in the Athens area with 1,000 places.
Greece -- already struggling to accommodate thousands of asylum-seekers stranded in the country -- has come under even more pressure since Turkey stopped preventing migrants and asylum seekers from leaving for EU territory.
"The Bulgarian army is on standby, and I guarantee that I won't allow a new migration wave to our country," wrote Karakachanov, the leader of the nationalist VMRO party, a junior coalition partner in the government.
"Bulgaria will not pay other people's bills!"
Bulgaria borders on both Greece and Turkey to the southeast but has so far not seen an influx of asylum seekers.
Conservative prime minister Boyko Borisov recently welcomed what he said was "zero migration" thanks to a barbed wire fence Bulgaria built on the 259-kilometre (160-mile) border with Turkey and his close ties with Turkish President Recep Tayyip Erdogan.
Bulgaria's 493-kilometre border with Greece is guarded by border police and has also has not seen any pressure recently.
In talks with Erdogan last week in Ankara, Borisov proposed undertaking ...