Bosnian Acquitted of Going to Fight in Ukrainian Conflict 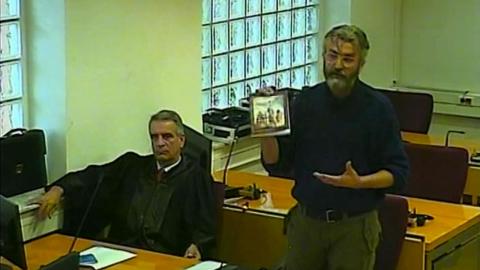 The state court in Sarajevo on Tuesday found Gavrilo Stevic not guilty of going to fight abroad, in the first case in Bosnia and Herzegovina against a defendant accused of involvement in the Ukrainian conflict.

Presiding judge Branko Peric said the prosecution had not proved that in July 2014, Stevic went via Belgrade, Moscow and Rostov-on-Don to Ukraine, where he joined the Jovan Sevic paramilitary unit together with several other Bosnian citizens.

"After having assessed the evidence in its entirety, the chamber cannot conclude beyond reasonable doubt that the defendant committed the crimes with which he is charged," Peric said.

He said that Stevic had admitted being in Luhansk in a separatist-controlled area of eastern Ukraine, but that there was only one photograph of him that might suggest he joined the pro-Russian unit.

"His stay in the area and one picture cannot be considered evidence that he joined a paramilitary formation. It could be concluded on the basis of that photo that it was bragging, rather than a real situation," Peric said.

Stevic told prosecutors that he went to Ukraine as a journalist and writer, not as a fighter.

Peric said that prosecution evidence obtained about Stevic from the internet or newspaper articles "could only serve as information during an investigation", not during the trial.

The prosecution had claimed that Stevic was given a handgun and patrolled checkpoints when he was a member of the unit, receiving a monthly salary of 500 euros.

It also claimed that Stevic received help from the Serbian nationalist Ravnogorski Movement to get to Ukraine, and travelled from Belgrade with a group of volunteers.

The verdict can be appealed.