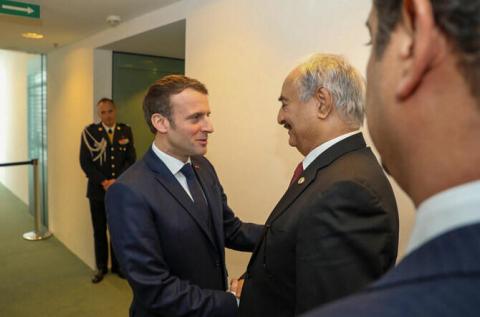 In a statement on social media, the Abu Salim Municipality, in Tripoli, said no one was killed or injured in the attack as the schools were empty at the time.

On Feb. 27, the U.N.-recognized Government of National Accord (GNA) said 21 civilians were killed and 31 wounded amid a relentless military campaign by Haftar's forces that indiscriminately targeted civilian areas.

In the meantime, Haftar on March 9 met with French President Emmanuel Macron in Paris.

A French presidency official told Reuters that Haftar said he will sign a ceasefire and stick to it if militias backed by the internationally recognized government respect it.
"Haftar assured [us] that he was committed to signing the ceasefire but this commitment would cease if the militias do not respect it," the official said after Haftar met Macron.

The official gave no further details.

Despite a peace conference held in Berlin in January, violence has increased in Libya, with combatants in the west and east preparing for a long conflict as foreign weapons flood in, eastern factions close oil ports and rival alliances wrangle over revenues from Africa's largest petroleum reserves.
The Libyan National Army (LNA), led by Haftar, and forces aligned with the internationally recognized GNA in Tripoli have been fighting for control of the capital since April last year.

The UAE and Egypt support Haftar, while the GNA is backed by Turkey. France has been accused of lending political support to Haftar, but Paris has denied this.

"Haftar is one of the main actors on the Libyan political scene and must be...