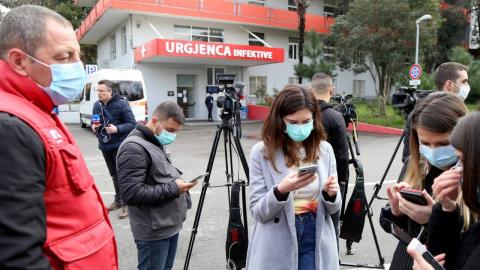 Albania reported its first death from coronavirus on Wednesday, an elderly patient who was being treated for pneumonia for the last five days after returning home from Italy.

"The 73-old-patient, a confirmed case of COVID-19, passed away a few minutes ago as result of complications from cardiovascular and pulmonary diseases," the Health Ministry said in a statement.

Albania has been on alert since registering its first coronavirus case on Sunday. Since then, the confirmed tally of cases has risen to 12 and the government has closed schools, nightclubs and gyms to contain the spread. The remaining patients are in a stable condition, according to the government.

Parliament has cancelled its plenary session planned for Thursday, while Prime Minister Edi Rama threatened to fine people who came from Italy and refused to quarantine themselves 5,000 euros.

Worldwide, about 113,000 persons have been infected with the coronavirus, of whom about 4,012 have died, according to the World Health Organization, WHO. About 4,000 new cases were identified worldwide in the last 24 hours.

Albania says the country should be prepared for the worst as the number of cases is expected to grow. Albania has multiple connections with Italy, where an estimated 600,000 Albanians live and work.

The shortage of medical staff is likely to put the health service under serious strain if numbers of cases climb. The country has seen am exodus of medical staff over the last few years, mostly to Germany, leaving hospitals in acute need of professionals. Even before that, Albania had one of the lowest ratios of healthcare specialists per thousand inhabitants in Europe.