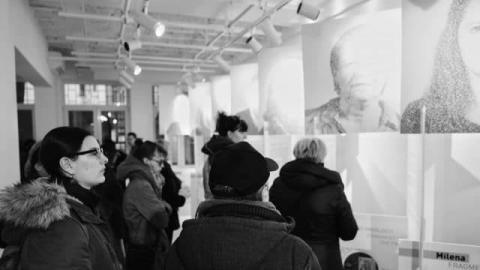 'Peace with Women's Face', an exhibition about women's experiences of surviving the 1992-1995 Bosnian war and overcoming the consequences in the post-conflict era, runs until March 17 at the Youth Initiative for Human Rights NGO's exhibition space in Belgrade.

"This exhibition is dedicated to women that have led small (and big) fights for their rights and rights of others in post-war Bosnia and Herzegovina and have rebuilt the wartorn society," the organisers, peace group Mir sa Zenskim Licem and German peace-building NGO forumZFD, said in the exhibition catalogue.

The 20 stories in the exhibition were chosen because they highlight the realities of wartime and post-war life for women in the country or could serve as an inspiration for female activists in the future, according to the organisers.

They said that remembrance of the war in Bosnia and Herzegovina is currently "exclusively tied to the three ethno-national narratives [Bosniak, Croat and Serb], without any space for women's experiences".

One of the stories, by Edina Karic, describes how a close-knit family was shattered by the war.

"We had to flee our home and go to the forest, where we hid. One day, we went back to the house to get some food, because we no longer had anything to eat. We were taken prisoners in front of the house. Captivity, multiple rapes, loneliness followed," Karic writes.

"I would like us, those women who have had similar experiences, to meet more frequently. It gets easier when we talk to each other. Sometimes we also joke and heal each other's pain," writes Obradovic.