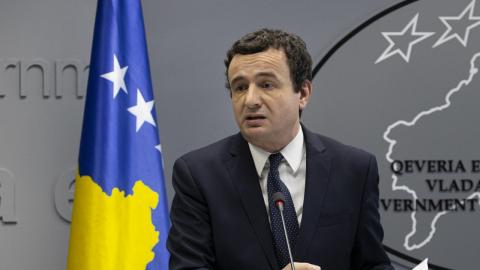 Kosovo on Friday confirmed its first two cases of coronavirus, as the authorities test more people. The announcement was made at a joint press conference of Prime Minister Albin Kurti and the Minister of Health, Arben Vitia. They said two of 15 suspected cases had tested positive for the virus. Both had arrived recently from Italy, by far the worst affected country in Europe.

The first was a 22-year-old Italian staying in the town of Klina and working for the Caritas humanitarian organisation, who arrived from Italy only five days ago. The second was a 77-year-old man from Vitia who arrived back from Italy on March 5.

The relevant institutions said they had begun to quarantine people with whom they had been in contact. The health director in Klina, Dr Hekuran Sejdiu, said the Italian national had been sent to the University Clinical Centre in Pristina, UCCK, after showing symptoms, where he is now receiving treatment.

"Together with the police … we are placing these people [who had been in contact with the patient] in quarantine in their homes," Dr Sejdiu said.

The director of health in Vitia municipality, Basri Aliu, told BIRN that the second patient had arrived back in Kosovo from Italy on March 5, and soon went to the emergency centre in Vitia where doctors suspected he had coronavirus and and sent him to Gjilan.

Along with Montenegro, Kosovo had remained free of reported cases of coronavirus until Friday. Minister of Infrastructure Lumir Abdixhiku on Friday suspended flights from Italy, France, Switzerland and Germany, while neighboring Albania closed its border crossings with Kosovo. Schools are shut until March 27. One parent has the right to be on leave and stay at home, under a government decision announced on Wednesday.