Trump will get rid of Kurti? 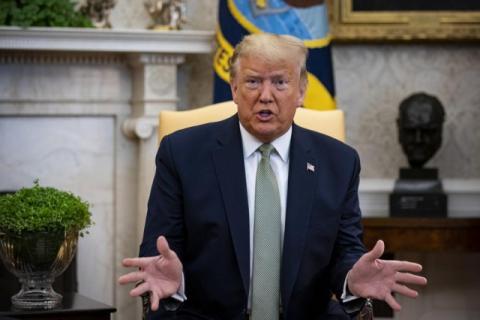 If Washington's threats of denying economic aid and withdrawing US troops from Kosovo and Metohija do not discipline the prime minister of interim Pristina institutions, Albin Kurti, and in case he does not suspend tariffs, it is not excluded that the United States will pull another trump card - a change of government in Pristina.
In an otherwise loose Kurti's ruling majority, his most important partner, Isa Mustafa's Democratic League of Kosovo (PDK) has been threatening to deny him support for days if he does not conditionally withdraw tariffs on all goods from central Serbia and Bosnia-Herzegovina.
In a political calculation that could be pushed by the US, a new majority would be made by Mustafa's PDK (28 MPs), Kadri Veseli's Democratic Party of Kosovo, that is to say, Hashim Thaci (24 MPs), Fatmir Limaj's Social Democratic Initiative (4 MPs) and Bedghjet Pacolli's Alliance for the New Kosovo (2 MPs). The required majority of the 61, out of the 120 MPs the Pristina parliament is composed of, in this case would be secured from the parliamentary "reservoir" of minority communities, excluding the Serb List.
The "war" between Albanian leaders in Pristina over fees and relations with the United States has particularly culminated with the return of Hashim Thaci, the President of the interim institutions in Kosovo, from the United States. He sharply criticizes Kurti for his stubborn policy of seriously risking that their main patron turns back on their independence of the false state, that is, as Thaci says, he's committment to "destroying historic alliances".
The leader of the Self-Determination, apparently encouraged by the support of one of the leading EU countries with a different approach to solving the Kosovo problem than the White House,...