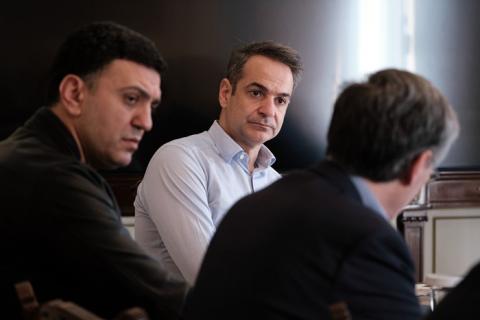 A mini -cabinet meeting to discuss the coronavirus pandemic-management plan today with ministers at a two-metre distance from each other decided to expand restriction of movement such as a ban on organised beaches, to which many Greeks had repaired to break the enclosure of self-isolation.

Greek cities large and small are gradually transforming into ghost towns and the closure of all shopping malls, cafes, bars, and restaurants and various shops except for supermarkets and pharmacies (only two at a time inside) has contributed to the drastic fall of traffic in public places.

The stance of the government and infectious diseases (ID) experts such as Professor Sotriris Tsiodras - who advises the competent National Organisation for Public Health (EODY) and is a top advisor to PM Kyriakos Mitsotakis - is to urge and force Greeks nationwide to hunker down at home until the coronavirus tsunami recedes.

Draconian penalties for public health measures violations have also been put in place.

Controversial stiff fines and even jail sentences have been passed to punish those who knowingly flout public health guidelines and infect or put the health of others at risk.

Moreover, 45 employees of illegally open shops were arrested today in an initial display of the government's zero tolerance policy on breaches of public health guidelines.

Greek ID experts say that will hopefully occur by late May, if public health measures are thoroughly enforced and succeed in limiting the spread.

Meanwhile, neighbouring Albania has decided to seal its border with Greece.

Many analysts and pundits compared the drastic measures to restrict the spread of the virus to measures taken during...