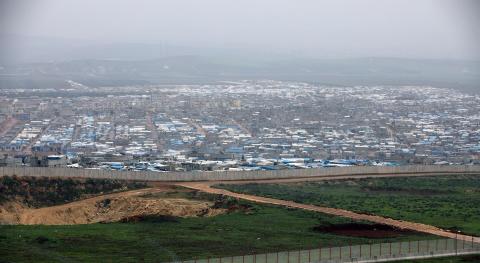 Turkish and British defense ministers visited Turkey's southeastern border on March 13 to observe the situation of refugees.
Hulusi Akar and Ben Wallace were in Turkey's border post in Hatay province and observed from an observation tower the refugee situation in Atma.
The ministers, with their delegations, met after the visit, along with the U.N. regional humanitarian coordinator for the Syria crisis.

Wallace said the U.K. supported Turkish operations in NATO and the U.N. Security Council to stop the conflict in Idlib province, northwestern Syria.

Meanwhile, U.N. representative Kevin Kennedy praised Turkey's effort to protect Syrians after an agreement between Ankara and Moscow on a cease-fire in Idlib was observed in the region.

He said there are more than 60 percent children in refugee camps and Turkey is doing an "enormous job" to help them.

He urged the international community to stand with Turkey in providing humanitarian aid and ending the conflict that triggered an immigration crisis.