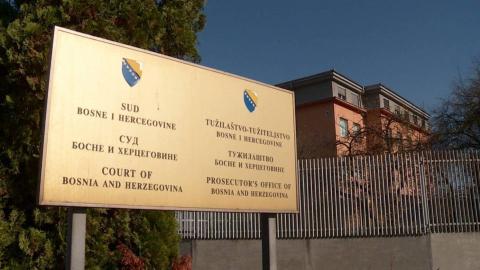 Selman Busnov's lawyer told the state court on Monday that his client is suing Bosnia and Herzegovina because of the psychological trauma he endured due to being kept under house arrest during his trial.

Lawyer Kenan Hadzimuhovic said that "any amount awarded by the court cannot sufficiently compensate for mental anguish, worry and fear that the plaintiff suffered".

Busnov, who was the chief of the police's Public Security Station in Kladanj in wartime, was cleared in May last year of the unlawful detention, beating and inhumane treatment of Serb civilians who were held in Stupari, near Kladanj, between May 1992 and July 1993.

As well as being barred from leaving his place of residence or leaving the country during the trial, Busnov had to report to the police regularly.

But Safija Krestalica of the Public Attorney's Office of Bosnia and Herzegovina argued that the request for compensation was unfounded because the restrictions were both necessary and legal.

Another acquitted defendant in the Kladanj case, Zijad Hamzic, is also suing the state for the same reasons as Busnov.

BIRN reported in 2018 that over 40 former defendants had successfully sued Bosnia and Herzegovina for damages after being acquitted of war crimes in various cases and received a total of over 1.5 million euros in compensation.

The next hearing in the Busnov case is scheduled for May 27.