Biden and Sanders criticize Trump on coronavirus, tout their own crisis leadership 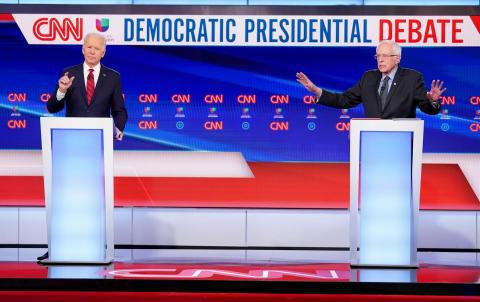 Joe Biden and Bernie Sanders blasted President Donald Trump's handling of the coronavirus outbreak during a Democratic debate on March 15, and touted their own approaches to dealing with a widening crisis that has upended the daily life of Americans.

In their first one-on-one debate, the two Democratic contenders to face Trump in the November election said the Republican president had contributed to growing worries about the global pandemic by spending weeks minimizing the threat before declaring a national emergency on March 14.

The showdown between front-runner Biden and his last viable rival in Sanders, originally scheduled for Phoenix, took place in a Washington studio with no audience, a move made to limit possible exposure to the virus - a sign of how deeply the campaign routine has been reshaped by the global pandemic.

When the two candidates took the stage, they smiled and shared an elbow bump - abiding by the advice of public health officials to avoid handshakes.

Biden committed to choosing a woman as his running mate if he is the Democratic nominee.

"If I'm elected president, my Cabinet, my administration, will look like the country, and I commit that I will in fact appoint and pick a woman as vice president," he said.

Both candidates used the debate, perhaps the last in the Democratic White House race, as an opportunity to project leadership and a sense of stability in the deepening crisis.

Biden recounted his experience as vice president in the Obama administration in dealing with the Ebola outbreak in 2014. He laid out a coronavirus plan to make testing free and widely available, establish mobile sites and drive-through facilities in each state and provide more help for small businesses hurt by the...