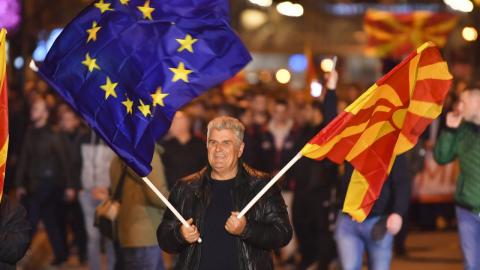 The survey carried out in January and February suggested that the Social Democrats led by Zoran Zaev enjoy 17 per cent popularity, while the opposition VMRO DPMNE party led by Hristijan Mickoski are on 16 per cent, putting them practically neck-and-neck.

In the ethnic Albanian campus, seven per cent of respondents said they would endorse the junior ruling Democratic Union for Integration led by Ali Ahmeti, five per cent opted for the opposition Alliance for Albanians led by Ziadin Sella, and four per cent said they would vote for the BESA movement led by Bilall Kasami.

The small Democratic Party of Albanians, DPA garnered one per cent support, the same as a leftist party simply called The Left. Two per cent said they would support some of the other smaller political groups.

There is a question mark over whether the early general elections will be held or not due to concerns about the coronavirus pandemic.

The survey, carried out just before these concerns grew, suggested that about three-quarters of voters were "very" or "somewhat" likely to vote.

The survey, which follows the EU's...