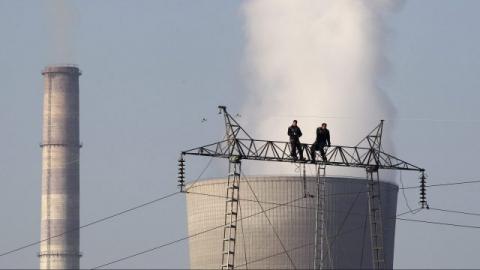 Electrical workers at a power plant in the town of Obilic in Kosovo, December 2011. Photo: EPA/VALDRIN XHEMAJ

Kosovo had a 1.3 billion euro contract with ContourGlobal to build the plant, which would have satisfied around half of the electricity demand in a country that suffers from power shortages.

The new power plant was expected to replace the capacities of Kosovo's older coal-fired power plants, Kosova A and B, which have been criticised for their significant contribution to Kosovo's air pollution levels.

With Kurti now in office as prime minister, ContourGlobal announced it was halting construction of the plant "as a result of the political situation in Kosovo".

It also said that the US company, which operates over 100 power plants in Europe, Latin America and Africa, "will not develop or acquire coal power plants in the future".

Concerns had been raised in Kosovo that the environmental impact of building the new coal-fired power plant was too high.

The project had met with fierce resistance from the Kosovo Civil Society Consortium for Sustainable Development, KOSID, an alliance of NGOs including BIRN Kosovo.

Their campaign led to the World Bank withdrawing its support for the plant in October 2018.

The co-founder of KOSID, Dajana Berisha, told BIRN that the decision not to proceed with the power plant was a relief.