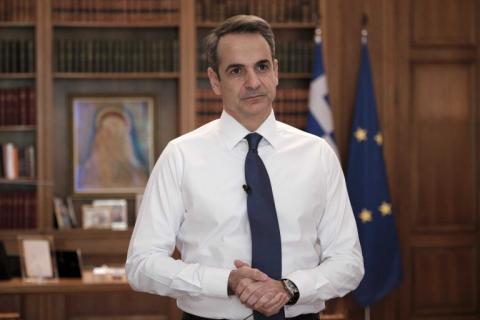 After having halteed flights to and from Italy, which has borne the brunt of the Coronavirus pandemic, Greece today barred as of 6:00 March 18 entry of all non-EU nationals.

The decision was announced hours before EU leaders decided to seal all its borders in a bid to limit the further spread of the virus.
In his second nationally televised address on the government's strategy in dealing with Covid-19 today Prime Minister Kyriakos Mitsotakis braced Greeks for a multi-front "war" that will lead essentially to a war economy which will aim to temper the devastating effects of the pandemic on Greek businesses.

"We are at war with an invisible but not invincible enemy," the PM said and declared that there will be victims as "difficult days lie ahead".

Mitsotakis announced that there are even more restrictive measures in store though the government has so far not announced a general ban on movement in public places.

The PM announced that the government will take substantial measures to offer relief and permit the survival of businesses and employees (with subsidies) even as reports project a large number of business shutdowns and redundancies.

He urged businesses not to proceed with layoffs as financial assistance is on the way.

Mitsotakis declared that Greece will have to adjust to a war economy in which the state and scientists will have expansive powers and underlined that the 16...

Know the rules: The A-Z for tourism in Greece in the Covid-19 era