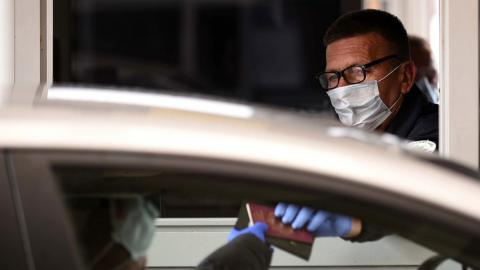 Alemka Markotic, head of the Fran Mihaljevic Infectious Diseases Hospital in the Croatian capital Zagreb, has experience in crises, having worked as a general practitioner in besieged Sarajevo for most of the 1992-95 Bosnian war.

She and Health Minister Vili Beros have won praise for their level-headed public statements and appeals for calm after Croatia, on February 25, became the first country in the region to report a confirmed case of COVID-19. The authorities have updated the public daily ever since, online and via press conferences.

One episode, however, "did great damage because panic rose to a higher degree," Mamic told BIRN.

On Sunday, March 15, Croatian media published a leaked document signed by the head of the capital's Emergency Management Office, Pavle Kalinic, urging city authorities to shut down cafes and restaurants, gyms and sports facilities and limit the operations of shops. The National Civil Protection Headquarters has not, so far, announced any such measures, and clarified that it was important to maintain a balance between "the epidemiological situation and the severity and breadth of the measures".

Mamic said clear communication of the facts was vital in such situations. "The key thing… is to communicate the facts so that we have the smallest number of fake news as possible," she said.