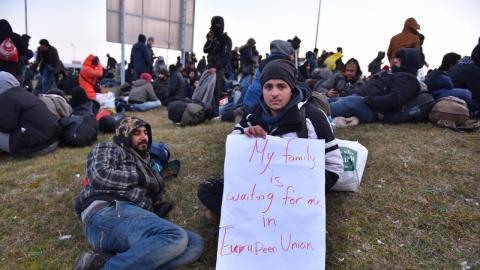 The Serbian government ordered on Monday that migrants and asylum-seekers living in state-run reception centres are not allowed to go out without special permission.

"In order to protect against the spread of infectious diseases on the territory of the Republic of Serbia, to prevent the uncontrolled movement of persons who may be carriers of viruses and arbitrarily leave asylum centres and reception centres, the movement of asylum-seekers and irregular migrants housed in asylum centres and reception centres in the Republic of Serbia is temporarily restricted and enhanced surveillance and security of these facilities is in place," the government's order said.

Those who need to go out to see a doctor or in other "justified cases" will need special, time-limited permission from Serbia's Commissariat for Refugees and Migration.

Serbia imposed a state of emergency over the COVID-19 pandemic on Sunday evening.

Apart from people who have been ordered to self-isolate, there are no restrictions on the movements of Serbian citizens.

The authorities did suggest that people older than 65 years could be restricted from going out in future out, but this measure has not been adopted yet.

Prior to the outbreak of the virus in Serbia, anti-migrant campaigners had been increasingly vocal.

On March 8, around 200 people held an anti-migrant protest in Belgrade followed by a march, during which an unknown person threw a rock at the Commissariat for Migrants and Refugees' office.

Some opposition parties, like Dveri, a member of Alliance for Serbia opposition bloc, have been pushing anti-migrant views for weeks, accusing the government of making secret deals to receive hundreds of thousands...