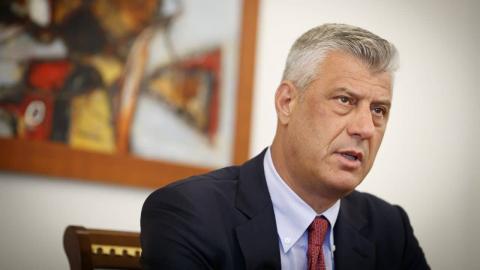 Prime Minister Albin Kurti on Wednesday dismissed Interior Minister Agim Veliu amid a dispute over whether to impose a state of emergency which has pitted the country's top political leaders against each other.

Kurti said that Veliu was dismissed because he had "undermined the work of the government" by making statements against official positions on declaring a state of emergency, as well as allegedly spreading panic over the coronavirus epidemic.

The government on Tuesday denounced President Hashim Thaci's proposal for the Kosovo Assembly to declare a state of emergency in response to the coronavirus outbreak, describing it as "extreme" and "an unnecessary cause of panic".

According to Kosovo's constitution, a state of emergency declared by the president and approved by the Assembly shifts the government's power to the Security Council, which is chaired by Thaci.

Veliu had told Kosovo TV channel Klan Kosova that a state of emergency should be imposed "to protect us from this dangerous threat to the entire world, but also to Kosovo".

"The situation in Kosovo is serious. The number of the affected is increasing," he said.

Veliu was nominated for interior minister by the Democratic League of Kosovo, LDK, the junior coalition partner of Kurti's Vetevendosje in the government. The LDK has also supported Thaci's proposal.

LDK leader Isa Mustafa has threatened to break up the governing coalition over Veliu's dismissal.

Veliu himself told BIRN that the decision to sack him was "unacceptable, totally unreasonable" and an attempt to hide Kurti's failure "to make the right decisions for Kosovo".

Meanwhile the Belgrade-backed Kosovo Serb party, Srpska Lista, has said it is against the state of emergency, claiming that...

Covid-19 and Greece focus of HBS webinar
LocalElections2020/ 15 international observers accredited for Sunday's local election
Alexandru Tomescu: Everyone has their own battle to fight, important is that music goes on