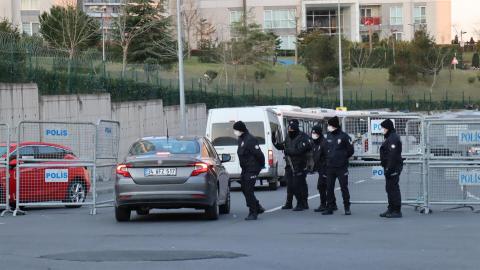 Turkey's vice president said on early March 18 that some 2,807 Turkish citizens have been brought home at their request from nine European countries on which Turkey imposed travel bans amid the global coronavirus pandemic.

Fuat Oktay said in a tweet that the evacuation was completed at 6:00 a.m. local time (0300GMT). He said that the returnees will be put under a 14-day quarantine in large dormitories located in the Istanbul and Kocaeli provinces.

"All measures for their health, safety, nutrition, and accommodation have been taken in line with the rules set by the Health Ministry and Science Board [for coronavirus]," Oktay said.

Even though every returnee has been put under quarantine, video footage from late March 17 showed a woman attempting to escape the quarantine.

After passengers arriving from Paris to Istanbul boarded a bus, two passengers were seen getting off the bus by police. The incident created fury among the passengers, who were also set to be put under quarantine.

The returnees reacted against the passenger who got off the bus and the authorities, saying the move breached the rules of quarantine and is an example of "double standard."

One of the passengers recorded the woman getting off the bus and posted it on social media.

The woman who got off the bus was later identified as Güzide Sofi, the daughter of Turkish Cyprus' Civil Aviation Director Mustafa Sofi.

"What can I say? My daughter is in quarantine in Turkey. My child boarded the plane to come to Cyprus and the footage was posted as she was coming here. We are the victims...