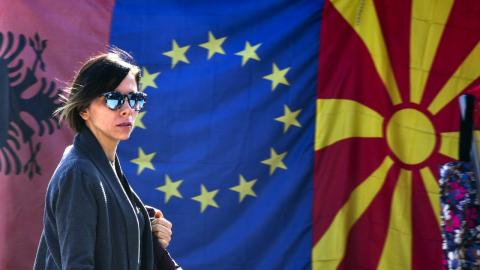 EU ambassadors are to make a decision on Thursday on a draft document agreeing the start of accession talks for Albania and North Macedonia.

If they approve the draft, the decision is expected to be confirmed later this month by EU foreign ministers and prime ministers, who are set to convene, probably via video conferences, on March 24 and 26 respectively.

"This afternoon the debate continues and the consensus, the work, is not yet fully finished. The prospects are very positive and we have positive signals from the vast majority of member states, but the text and the debate is not fully done," North Macedonia's Foreign Minister Nikola Dimitrov told a joint press conference with his German counterpart Michael Roth on Thursday.

Roth participated in the press conference via a video conferencing link because the coronavirus crisis prevented him from visiting Skopje.

The German foreign minister also expressed optimism for a positive outcome and the start of accession talks for both countries.

The launch of accession talks would require unanimous support from all EU member states, however.

The Politico news website said on Wednesday that it has seen the draft that is on the table and cited key parts of it.

"In light of the progress achieved on reforms and the fulfilment of the conditions unanimously set by the Council in June 2018, subject to the endorsement by the European Council, [the Council] decides to open accession negotiations with the Republic of Albania," says the text, according to Politico.

If the start of accession talks is approved this month, it would represent a positive breakthrough from last October when the European Council in...