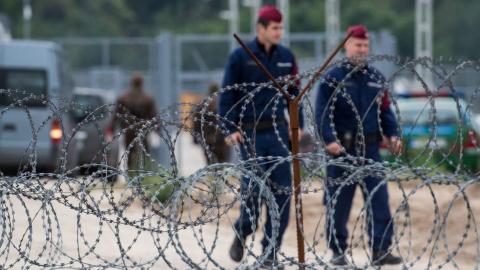 Visit our liveblog for the latest coronavirus updates

Yet even in the midst of the pandemic, the government of Prime Minister Viktor Orban has warned of a crisis of mass migration — despite the fact that the country's frontiers have largely been sealed to migrants and refugees since 2016.

On March 5, as the coronavirus calamity mounted, the government extended a "crisis situation due to mass migration" — the eighth such extension since Europe's 2015 migrant and refugee crisis.

Then on March 13, two days after Hungary declared a state of emergency over COVID-19, Lajos Kosa, chairman of the Parliamentary Defence Committee, discussed the dangers of illegal migration on Hungarian public TV.

"Illegal migration has grown at the end of last year," he said. "There are around 130,000 people stranded on the Balkan route who would like to enter the EU. Most of the migrants are not from Syria but from Afghanistan, Iran and Pakistan. They are economic migrants coming from unsafe sanitary conditions."

Ten days earlier, authorities had shut the notorious transit zones of Roszke and Tompa along the Serbian border, and not a single asylum seeker has been let in since.

The official reason for the shutdown was to protect people from coronavirus — and especially infection from asylum seekers from Iran, one of the worst-hit countries in the global pandemic.

The government has blamed migrants for bringing coronavirus to Hungary since the first cases were detected among Iranian students in Budapest (never mind that they were studying in the country legally).

According to government media, 13 Iranian students are now in custody for not cooperating with authorities and protesting against conditions under quarantine in hospital, and will...