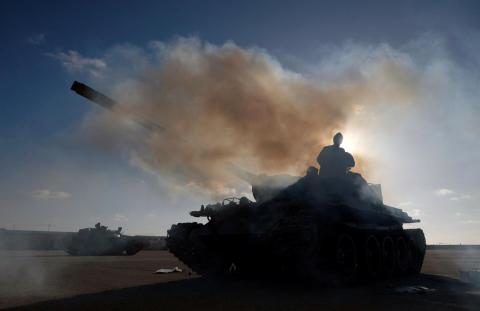 The agency reported on March 19 that three children from the same family were killed in the first attack in southern Tripoli's Ain Zara suburb, according to the Health Ministry under the U.N.-recognized Government of National Accord (GNA).

One woman was killed later the same day in the capital's Bab Bin Ghashir district when a rocket struck her car, also wounding her daughter and niece, according to a statement by the GNA's Volcano of Rage Operation.

Heavy fighting between GNA forces and Haftar militias has been ongoing since early March 18.

The United Nations, along with nine countries, on March 17 called on Libya's warring parties to cease hostilities to allow health authorities to fight against the new coronavirus.

In a joint statement, the ambassadors of Algeria, France, Germany, Italy, the Netherlands, Britain and the United states, as well as the European Union delegation to Libya and the governments of Tunisia and the United Arab Emirates called for a "humanitarian truce".

They called on the warring parties to "declare an immediate, humanitarian cessation of hostilities... to allow local authorities to respond to the unprecedented public health challenge posed by COVID-19."

The United Nations Support Mission in Libya joined the call, urging asking all parties "to join forces immediately before it is too late to face this overwhelming, fast-spreading threat".

War-torn Libya is largely divided between forces backing the Government of National Accord (GNA) and those of eastern-based military...