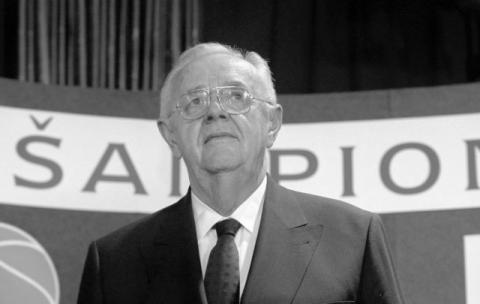 Stankovic is one of the founders of BC Red Star, a Yugoslav national team player and the man who scored the first basketball points in the World Cup history.
Stankovic played for Red Star, Zeleznicar and Partizan during his playing career from 1946 to 1953, while he also served as coach in the BC Partizan.
He worked as the coach until 1970, and for ten years led the OKK Belgrade, and won the title in Italy with Cantù. He was Yugoslavia's champion three times as a player and coach, with two Yugoslav Cups.
However, he will forever be remembered in the history books as a functionary, holding the post of Secretary General of FIBA ​​from 1976 to 2002, and also a member of the International Olympic Committee.
During his era, basketball has transformed into one of the most popular sports in the world, with particular emphasis on encouraging foreign basketball players to try in the NBA, and allowing NBA professionals to play for their teams at the 1992 Olympics and afterwards at world championships.
Stankovic is one of the most responsible for the huge expansion of basketball in the second half of the 20th century, and in his era we got a three-point shot line, new dimensions of the pitch, instead of two halftime games organized by FIBA ​​changed the system to four quarters to bring the game closer to NBA basketball.
Thanks to him, Croatia won the right to compete in the 1992 Olympic Games in Barcelona, where the Croats were defeated in the finals by the original "Dream Team".
He then literally "invented" the qualifications for the 1995 European Championships in Athens, which allowed FR Yugoslavia to return to the international scene and win a historic gold medal.
He was born in Bihac, today Bosnia and Herzegovina in 1925,...