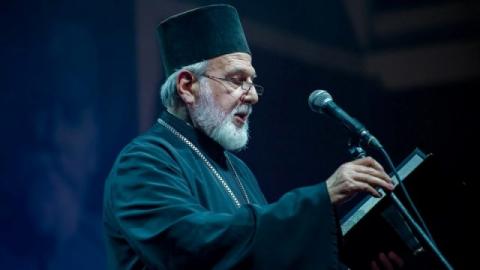 Krivokapic on celebration in Budva. Photo: Courtesy of IN4S website

They are suspected of breaching measures imposed to fight the coronavirus outbreak in the tiny Adriatic country. Under rules introduced on March 13, all public gatherings in the country are banned.

Krivokapic denied breaking the rules, saying that "only 15 to 16" people attended the service. However, the anti-coronavirus measures do not say that gatherings of such a size are exempted from the ban.

Krivokapic said the service was intended to express gratitude to the Virgin Mary for "keeping Montenegro safe from the plague".

"We continue to hold this service because the Virgin Mary protected us from the plague long ago and now we are praying to be kept safe from the plague of this new era," Krivokapic told local news website IN4 on Friday.

"I told the police that if necessary, we will stop this prayer gathering," he added.

Thirteen cases of the novel coronavirus have been confirmed in Montenegro, while 4,369 people are under medical supervision.

It also banned more than two adults from driving in the same car.

As a measure to prevent the spread of the coronavirus, all religious communities temporarily stopped holding services in churches and mosques on March 13.

The Serbian Orthodox Church in Montenegro has also temporarily halted its protest marches, which have been held since early January against the controversial Freedom of Religion law, which it claims could result in the seizure of church property by the state.

On March 18, Metropolitan Amfilohije, the top bishop in the Serbian...