No Convictions for Radovan Karadzic’s ‘Helpers in Hiding’ 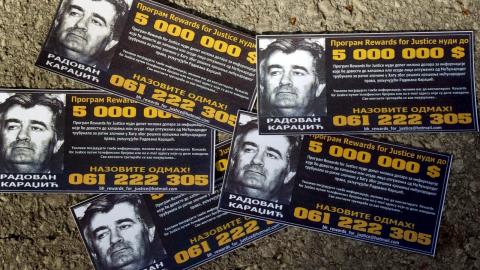 The Bosnian state prosecution investigated 58 people for offering financial support to Karadzic, but its probe was discontinued several years ago because there was no proof that any crimes were committed, and the people under investigation cooperated with the Hague Tribunal.

The Bosnian prosecution declined to respond to BIRN's questions about any ongoing investigations into Karadzic's helpers "for reasons of confidentiality".

Meanwhile three prosecutor's offices in Belgrade told BIRN that they had not conducted investigations into any individuals who have previously been mentioned as suspects, while another Belgrade prosecutor's office declined to respond to BIRN's inquiry, citing personal data protection legislation as the reason.

"We have repeatedly sought information and exerted pressure to see Hague fugitives' helpers adequately prosecuted, but we have never heard anything about the fate of those investigations," said Murat Tahirovic, the president of the Association of Witnesses and Victims of Genocide.

Karadzic in disguise as 'spiritual healer' Dragan Dabic while he was on the run. Photo: EPA/HEALTHY LIFE.

In 1995, the last year of the Bosnian war, the International Criminal Tribunal for the Former Yugoslavia filed an indictment charging Karadzic.

The following year, he resigned as the president of Bosnia's Serb-dominated entity Republika Srpska and of the Serb Democratic Party,...