The earthquake in Zagreb destroyed walls and roofs VIDEO / PHOTO 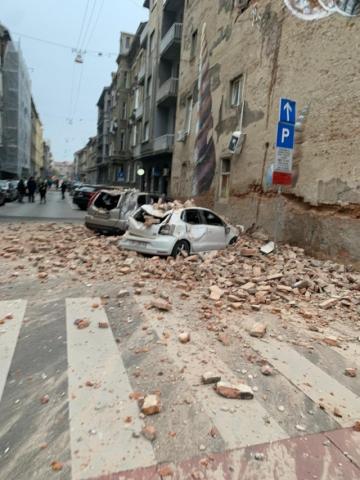 The epicenter of the earthquake was seven kilometers north of Zagreb at a depth of ten kilometers.
Index.hr first announced that an earthquake had killed a 15-year-old child. An ambulance took to the field but the child showed no signs of life. However, the latest information is that the child is alive and doctors are fighting for her life.
The girl, aged 15, was admitted to the hospital with head injuries and was resuscitated. She is currently undergoing intensive treatment and diagnosis and, as doctors say, is in a very critical condition.
After the earthquake, there are dead people, Hina reports, citing information from a Zagreb fire station.
According to Jutarnji List newspaper, Croatian President Zoran Milanovic was evacuated from his apartment due to an earthquake.
In some parts of Zagreb, power was briefly gone. Index.hr reports people say they do not remember when such a strong earthquake occurred in Zagreb. The top of the cathedral was also damaged.
In some buildings, walls were cracked, the roof collapsed and shelves fell in the apartments.

Keep 🇭🇷 Croatia in your thoughts and prayer, Zagreb just awoke to a strong earthquake https://t.co/IBI87dAvd3

The Croatian Interior Ministry recommended that Zagreb residents should stay outside, wear protective masks and keep a distance from each other in order to prevent the...