23 inmates dead after protest over virus fears in Colombia 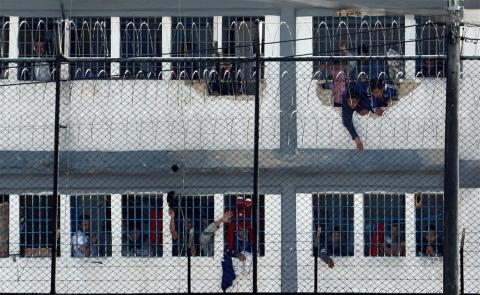 A deadly riot broke out in a prison in Colombia's capital, leaving 23 inmates dead, authorities said on March 22, as tensions rise over the spread of the coronavirus in one of the most vulnerable locations: crowded, poorly kept penitentiaries.

Justice Minister Margarita Cabello described the events at the La Modelo prison in Bogota as an attempted prison escape, but advocates for inmates said officials had cracked down on inmates staging a peaceful protest over conditions they feared would exacerbate infections with the virus.

"Today is a sad and painful day for the country," Cabello said.

The conflict at La Modelo, which houses both suspects and convicts of crimes ranging from burglary to drug trafficking, began late on March 21 evening. Inmates shared videos online showing people outside their cells, yelling as shots rang out in the distance.

On March 22, evidence of the violence was still visible: The body of one man lay face-up on a roof, dressed in bright blue shorts, white sneakers and a bloody gray sweatshirt. Family members, many wearing protective masks, gathered outside, clamoring for information.

"We're desperate because we don't know anything," one woman cried.

Authorities did not provide a detailed account of how the inmates died, saying only that seven jail workers had also been injured, two critically. Cabello said no inmates had escaped and that to date, none had been diagnosed with coronavirus either.

"This was a criminal attempt to escape that was thwarted," she said in a video statement.

Colombia thanks Turkey for 250 hospital beds amid virus