Kosovo Opposition to Back No-Confidence Motion in Govt 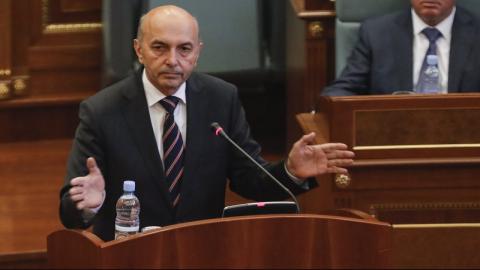 The presidency of the Kosovo parliament will meet on Tuesday to consider the no-confidence motion against the government of Albin Kurti initiated by the junior partner in his coalition government, the Democratic League of Kosovo, LDK - which looks increasingly likely to pass.

Under parliamentary procedures, the no-confidence motion should be considered at a hearing in the Assembly no later than Wednesday. Arbërie Nagavci, deputy speaker from the main ruling Vetevendosje party, told BIRN that the Assembly had addressed the National Institute of Public Health of Kosovo, NIPHK, on holding a hearing about the motion under current social-distancing guidelines.

On March 21, the NIPHK recommended all citizens "strictly maintain a social distance of 2 metres". On Monday, BIRN contacted the NIPHK about the possibility of holding a session in these circumstances but did not receive an answer by the time of publication.

The LDK submitted its no-confidence motion against the government, with 46 MP signatures, on Friday. It came after Prime Minister Kurti, from the Vetevendosje party, sacked LDK Interior Minister Agim Veliu on Wednesday amid disagreement on how to tackle the coronavirus crisis.

The constitution requires a minimum of 40 MP signatures to request a no-confidence vote, which will pass if it receives a simple majority - meaning 61 of the 120 MPs. Kosovo would then be left without a government, causing further chaos and obstacles in decision-making at a time when the country is struggling with the coronavirus pandemic.

So far, a majority of opposition parties have confirmed support for the no-confidence motion, suggesting it will pass if the session takes place.

On March 20, former speaker Kadri Veseli, leader of the biggest...