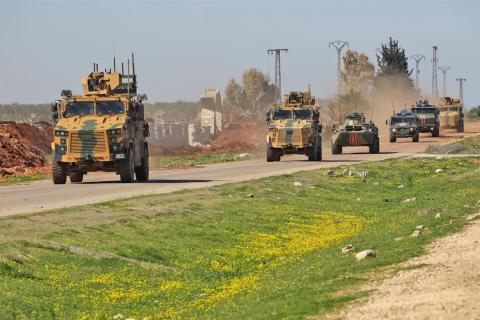 A written statement issued by the ministry informed that the second combined patrolling with Russia included land and aerial elements as part of the Moscow deal between Ankara and Moscow. The first joint patrolling was conducted on March 15.

The Moscow deal stipulates the cessation of military activities in Idlib where an armed conflict between Turkish and Syrian troops escalated in February, killing around 60 Turkish troops. The Turkish retaliation had inflicted a heavy blow on the Syrian regime forces.

The deal has brought about the establishment of a security corridor six kilometers to the north and six km to the south of the M4 highway, a strategic motorway that links Aleppo to Latakia. Turkey controls the northern strip and Russia the southern bank of the corridor.

The joint mission was carried out on a shorter route on the M4 highway in a bid to avoid provocative actions against the two militaries.

In the meantime, a statement from the Russian Defense Ministry on March 23 said Russia and Turkey were forced to cut short their second joint patrol in Idlib region due to security concerns. The first mission was also cut short, according to the Russian side.

The statement did not detail the security concern.