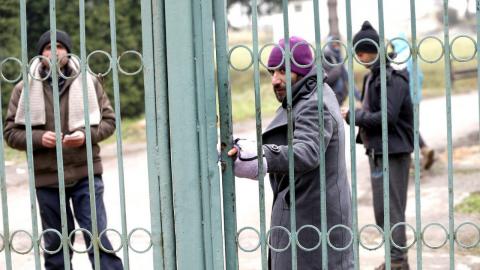 Representatives of Serbs who returned to Bosnia's Federation entity after fleeing during the war urged the authorities in the Una-Sana Canton on Monday not to build a tent settlement for migrants in the village of Lipa.

The settlement is being built for migrants who cannot be accommodated in existing temporary reception centres due to lack of space. An estimated 3,000 migrants are currently without accommodation and are being urged to stop sleeping rough because of fears about the coronavirus.

But Djordje Radanovic, the chairman of the Committee for the Protection of Serb Rights in the Federation of Bosnia and Herzegovina, said that the migrant settlement would be an "insult" to Serb returnees in Lipa.

"Bringing migrants from Bihac to Lipa would further worsen the situation in the village and discourage the possible return of Serbs because local authorities have not yet provided them with basic necessities for a normal life," Radanovic said.

Few Serbs have returned to this part of the Bosniak- and Croat-dominated Federation entity, and those who have done are living in difficult conditions, and fear that the migrants' arrival will make their lives even harder.

Radanovic also claimed in November that Muslim migrants want "to erect houses and mosques and to stay there once they come".

The Committee for the Protection of Serb Rights has already filed a criminal complaint against Bihac mayor Sufret Fazlic for advocating the site.

Radovan Grajic, coordinator for the Protection of the Property Rights of Persons Originating in the Federation of Bosnia and Herzegovina, a Serb returnee organisation, accused the cantonal and municipal authorities of not having the authority to order the building of the settlement.