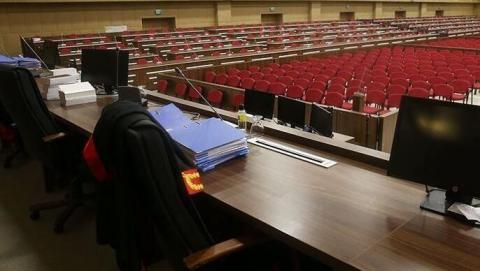 The ruling Justice and Development Party (AKP) has drafted a proposal for criminal enforcement arrangements for prisons and will exchange views with the opposition parties as part of measures against the novel coronavirus pandemic.

The AKP submitted its draft text of the arrangement to the Nationalist Movement Party (MHP) last week and submitted it to the main opposition Republican People's Party (CHP) and İYİ (Good) Party on March 24.

The law proposal, which includes the enforcement arrangement, is expected to be presented to the Assembly Presidency after the negotiations are completed.

The arrangement prepared by the AKP aims to evacuate nearly 100,000 people out of a total 300,000 convicts, making changes in 10 different laws primarily in the Turkish Penal Law and Criminal Procedure Law.

The arrangement changes conditional release rates. The convicted who completed half of his sentence will be released conditionally, according to the proposal. The probation period will be increased to three years. The scope of the "penal execution in housing" application for women, children and the elderly will be extended.

The arrangement will not include those charged with deliberate killing and terrorist crimes. Conditional release rates applied in these crimes will not change.

With the regulation, the perception of impunity in the practice of probation will be eliminated. Every convict will spend at least 40 percent of his sentence at the penal institution.

Remission on sexual offenses and the drug trade

The probation period will be increased from one year to three years in all crimes except intentional murder, terrorism and privacy crimes.

The regulation will also extend the scope of the...