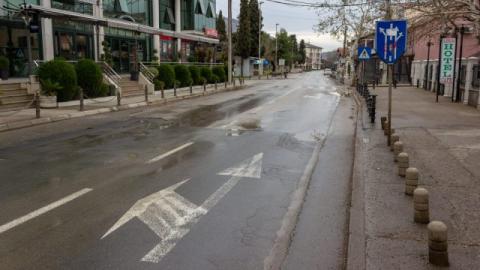 Government vice-president Milutin Simovic told locals on Tuesday night that they would have to remain at home until further notice. "Without exception, all citizens of Tuzi must be at their homes. We are beginning a battle for this town and for all of Montenegro," Simovic told a press conference.

The Tuzi area borders the capital, Podgorica, on one side and stretches to the border with Albania on the other. It is also known as Malesia, and is a stonghold of the ethnic Albanian minority, which numbers about 5 per cent of the country's population.

Since Tuesday night, all roads from Tuzi to Podgorica have been blocked, while police and army are on the streets and manning checkpoints. Movement on the streets is banned, while volunteers will supply citizens during the quarantine period.

The town's emergency headquarter said that all citizens who had come into contact with the infected cases will have to be tested.

Twenty-three more cases of coronavirus were confirmed in Montenegro on Wednesday while 5,972 people are under health surveillance. So far, there are 42 confirmed cases of Covid-19 in the country. One patient has died from the disease.

The capital has offered a 50,000-euro donation to Tuzi to help the town cover costs, while city services will also disinfect all public places in Tuzi.

The head of the Institute for Public Health, Boban Mugosa, said the situation in the town was worrying. "Tuzi has a population of 15,000. If they [coronavirus infections] expanded to just 40 per cent of the population, it would go up to 6,000 [cases]. This is a drastic situation," said Mugosa.

Mayor of Tuzi Nik Gjeloshaj called on citizens to respect the government's measures for...