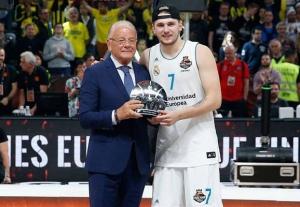 Dončić was first short-listed for the team, with fans, sports journalists and EuroLeague captains and coaches deciding on the final selection of ten players.

According to the votes cast by the fans, Dončić made it to the seventh place.

The 21-year-old joined the Real Madrid youth academy at the age of 13 and led the Spanish club to the 2018 EuroLeague title, winning the tournament's MVP award as the youngest player ever.

What followed was the NBA draft and a series of accomplishments across the pond - winning Rookie of the Year for the 2018-2019 season and being selected for the NBA All-Star game this year.