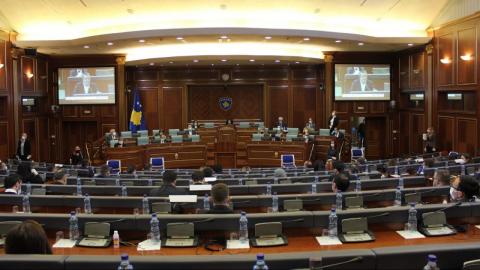 The Kosovo government led by Albin Kurti was overthrown on Wednesday by a no-confidence motion initiated by the junior party in the governing coalition, the Democratic League of Kosovo, LDK.

With 82 votes in favour, 32 against, and 1 abstention, the government was bought down following a series of disputes over important decisions between the main governing Vetevendosje party, to which Kurti belongs, and the LDK.

The speaker of parliament, Vjosa Osmani, herself a member of LDK, declared her opposition to the motion.

In a speech at parliament, she said, "I disagree with the motion of no confidence, so much more at the moment [in regards to the global coronavirus pandemic]. I am against any agreement with PAN, and I do not want to break the trust of citizens at any cost, so I will vote against the motion".

Osmani, together with the deputy speaker, Arberie Nagavci, from Vetevendosje, opposed holding the vote at an Assembly presidency meeting on Tuesday.

Late on Tuesday, in a debate on the TV station T7, the LDK deputy leader and former interior minister Agim Veliu - whose dismissal caused the LDK to file the no-confidence motion - accused Osmani of "betrayal".

The decision to file the motion in the midst of the coronavirus pandemic has shocked many experts, citizens of Kosovo and international officials.

Many people have staged daily protests against the political wrangling for six days in a row from their balconies while in self-isolation.

Banging kitchen utensils, they staged another protest at around 11am on Wednesday, when the extraordinary parliamentary session started.

The activist group Replike (Comeback), which initiated the balcony protests, said the political class had again shown it was...