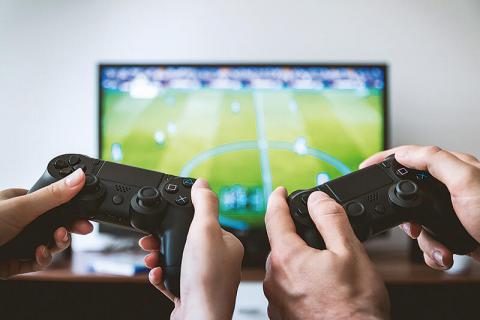 When two Spanish footballers took to the controls of "FIFA 20" after the coronavirus pandemic saw their La Liga match cancelled, a stadium-sized virtual audience watched online.

The huge digital crowd last week is part of a spectacular boom for the digital gaming industry, as record numbers flock to online servers for distraction, entertainment and friendship with the "real world" seemingly falling apart.

Real Betis striker Borja Iglesias kicked the winning goal using his own digital likeness in the 6-5 battle against Sevilla, which was broadcast on popular video game streaming platform Twitch.

It took place at the same time the original derby had been scheduled, before Spain's premier tournament was postponed as part of containment measures that have also seen the country's 46 million people largely confined to their homes.

"We do all of this to entertain all of you, so that you can be at home enjoying it, insofar as it is possible with this epidemic," the host of the broadcast told his audience of 60,000.

Nearly every country around the globe has reported cases of COVID-19 infection, with frantic efforts to contain the disease prompting the near total shutdown of some of the world's biggest cities.

Online gaming has proved a welcome diversion for many people chafing at movement restrictions, the cancellation of countless public events and a relentless onslaught of news about the pandemic.

"It made me feel less depressed about being in a small space for a long time," said Yang An, who was made to quarantine for two weeks in China after returning to Shanghai from her hometown last month.

She told AFP that she passed the time by playing for up to eight hours a day on her Nintendo Switch handheld console.

The Tragedy in Spain is Growing: Over 800 COVID-19 Victims for the Last 24 Hours

98.6% of Chinese Production has Recovered