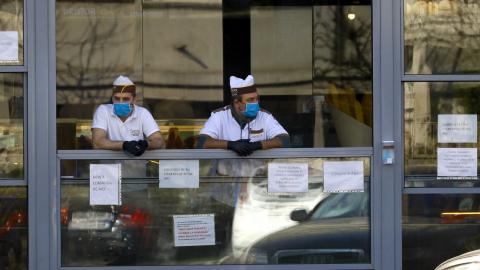 "If the current crisis goes on for than three months, I will have to close my business for sure," said Damian. "There's no other option." says dr. Serban Damian.

Since the second week of March, the government has been trying to delay the spread of the virus by shutting down most economic activity, closing shops bars and restaurants and banning all indoor cultural, scientific, religious or sports activities.

It has also closed its border to foreigners and suspended air links with a number of countries.

Only food stores and pharmacies remain open, shelves frequently emptied by bouts of panic-buying. On March 23, a nationwide night-time curfew was imposed until at least mid-April.

Last week, the centrist minority government approved a package of measures worth almost two per cent of national economic output and aimed at protecting the economy from the worst effects of the virus. Romania's Gross Domestic Product, GDP, for this year is estimated at 1.05 trillion lei, or some 213 billion euros.

The measures include the payment of technical unemployment for companies that suspend their operations because of the coronavirus, but also guaranteed lines of credit for companies that take loans for investment or postponing income tax payments by some companies for up to two months.

So far, 37 per cent of companies have curtailed operations and 23 per cent shut down activities completely. Around 200,000 people have temporarily suspended their work contracts, most of them in the tourism, hospitality, transport and automotive industries.

Several companies, among them Romania's largest exporter Dacia, a unit of...