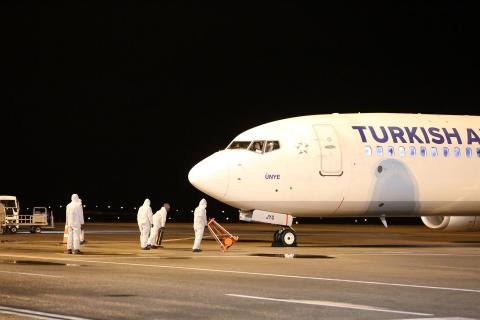 Turkey evacuated more than 2,000 students from Europe, Egypt, and Turkish Cyprus as of March 25 after flights were suspended due to the novel coronavirus

Turkey finalized the evacuation of 2,721 students who were temporarily staying and wanted to return from England, Ireland, Switzerland, Poland, Italy, Egypt, and Turkish Cyprus, the countries which suspended flights to Turkey, Vice President Fuat Oktay tweeted on March 25.

Another 213 students coming from Rome Fiumicino Airport also arrived in the province.

All evacuees were referred to emptied dormitories in Samsun and Sakarya provinces. They will be placed in quarantine for 14 days as part of Turkey's coronavirus quarantine measures.

The flights were arranged for students in the U.K., Ireland, Poland, Italy, Egypt, Saudi Arabia and the United Arab Emirates who wanted to come back to Turkey. Foreign Minister Mevlüt Çavuşoğlu earlier said 3,358 students would be brought back from seven countries with flight bans and will be quarantined at dormitories in various Turkish cities.

Turkey has 1,872 confirmed coronavirus cases, with the death toll at 44, according to the Health Ministry.