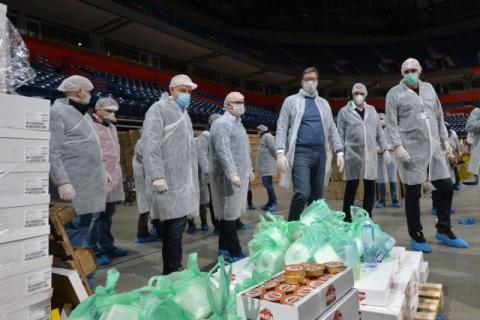 Vucic also spoke with businessmen who provided these goods.
Vucic thanked the businessmen for their help and said that they had shown tremendous responsibility, as well as their zeal and love for their country.
The president of Serbia has announced that the state will provide significant assistance to businessmen and invest billions of euros in the private sector. He emphasized that a large and serious package of measures for businessmen is being prepared, which will have significant assistance from the state.
"We will come up with the first big and significant measures in 10 days, if not even before, we will sit down to see what we can still do and what we can expect from you," Vucic said during a visit to volunteers and businessmen who send assistance to the vulnerable group of citizens.
"I expect a very strong and fast recovery in the third and fourth quarters," Vucic added.
Food trucks arrived at Stark Arena last night, and today, around 350 volunteers have started packing.
This is the assistance of the City of Belgrade and the Serbian Chamber of Commerce (SCC) to the most vulnerable citizens.
As it was announced earlier, the first packages of assistance to the pensioners will be received tomorrow, no later than Friday, and the delivery will last about ten days, as 15.000 packages will be sent on a daily basis from the Arena.