Belgrade Urges Serbs to Stay out of Kosovo Crisis 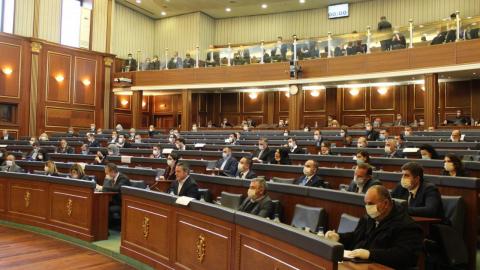 The director of Serbia's Government Office for Kosovo, Marko Djuric, has called on Srpska Lista [Serbian List], the Belgrade-backed political option in Kosovo, to stay out of what he called the "Albanian-Albanian" political conflict in the country.

Djuric said that by backing the no-confidence vote on Wednesday in the Kosovo parliament in the government led by Albin Kurti, the party had not closed the door on cooperation with others who want better relations and dialogue with Serbia.

Parliament in Kosovo voted down the Kurti government on Wednesday night. The vice president of Srpska Lista, Kosovo MP Igor Simic, announced before the vote that all ten of his MPs would support the no-confidence motion filed by the junior partner in the government, the Democratic League of Kosovo, LDK.

"When it comes to the [Kurti] government's work we have too many objections, Simic told the parliamentary session on Wednesday.

"First is the decision not to abolish the taxes [on imports from Serbia], which all citizens in this region suffer from today … and the other thing is that this government did not show a minimum of respect for the Serbian people, that is, for the representatives of Serbian List, elected by those people in legal, democratic elections," he said.

Kurti formed his coalition government on February 3, after months of negotiations following elections last year. The ten Srpska Lista MPs would "not support the formation of this government", Serbian Prime Minister Ana Brnabic said in February.

However, two members of the party, Ivan Milojevic and Dalibor Jeftic, later assumed places in Kurti's cabinet, as ministers of Rural Development and Communities and Returns.

This is not the first time the party has changed its mind over...