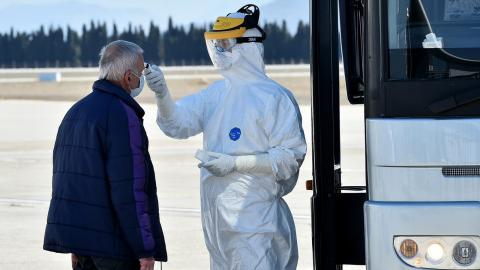 The country, which has been run by the same party for the past three decades, has a long record of restricting human rights and violating data privacy rights.

Activists fear the government will exploit the COVID-19 pandemic to clamp down further. The government says its overriding priority is to protect the lives and health of Montenegrin citizens.

"I am afraid that an attempt to deal with one danger could create another danger," said Daliborka Uljarevic, executive director of the Podgorica-based Centre for Civic Education.

On March 13, a court imposed 30 days custody for a Montenegrin man who wrote on Facebook that state officials were concealing the true extent of the pandemic.

On March 22, another man was arrested on suspicion of falsely claiming that he had been infected.

The next day, police announced that 60 people had been charged with violating the restrictions imposed by the government to combat the spread of COVID-19, including those accused of spreading 'fake news' and others who opened restaurants after the government ordered them closed.

The same day, in the coastal town of Kotor, a Russian citizen was arrested after she wrote on Instagram that around 1,000 people had been infected by the virus in Montenegro and that six people had died of complications.

Authorities have used such tactics before, arresting two NGO activists in January over their Facebook posts during protests organised by the Serbian Orthodox Church against a controversial freedom of religion law. Three journalists were also detained on suspicion of causing panic and public disorder in their writing.