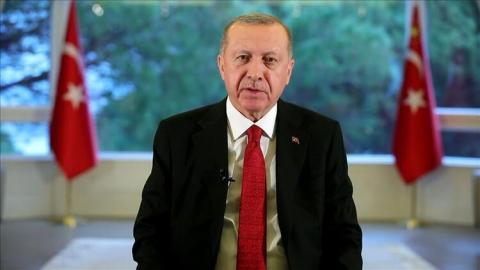 Turkey will overcome the coronavirus outbreak in two to three weeks through good measures, with as little damage as possible, President Recep Tayyip Erdoğan said on March 25.

In a televised address to the nation, Erdoğan said Turkey was prepared for every scenario on the outbreak and urged Turks to show patience, understanding, and support.

"By breaking the speed of the virus' spread in two to three weeks, we will get through this period as soon as possible with as little damage as possible," Erdogan said.

"Bright days await us, so long as we adhere by the warnings, remain cautious and careful," he added. "Every citizen's life is equally valuable to us. That is why we say 'Stay Home Turkey'."

Ankara has taken a series of measures to contain the virus, including limiting the use of public spaces, imposing a partial curfew on the elderly, as well as closing schools, cafes, and bars, banning mass prayers, and suspending sports matches and flights.

Turkey is ready for all possible scenarios about the coronavirus, the president conveyed.

He also said that Turkey was one of the first countries to take precautions against the novel coronavirus and that the country currently had 165,000 doctors, 205,000 nurses, 490,000 medical officials, and 360,000 support staff.

Assuring that the government would always stand by tradesmen and craftsmen, Erdoğan said the unemployment fund and credit guarantee fund would be strengthened.

"The world is moving towards a period in which nothing will be the same after this epidemic disease, and a brand new global, political, economic and social system will be built," the president said.

The president said that the country would earmark 7 billion Turkish Liras ($1.08 billion) in...