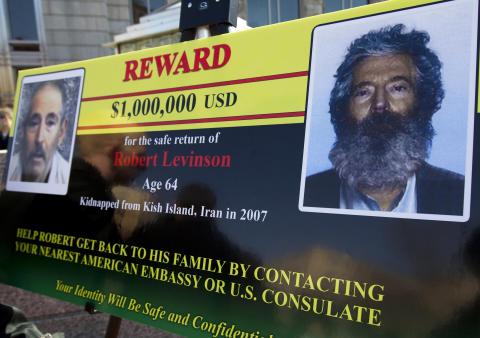 The family of Robert Levinson, the former FBI agent who disappeared in March 2007 after traveling to an island controlled by Iran, said on March 26 it now believes Levinson died in Iranian custody, based on information from U.S. officials.

President Donald Trump said on Wednesday he had not been told that Levinson was dead, but things did not look good and a lot of people thought Levinson had died.

White House national security adviser Robert O'Brien said in a statement later: "While the investigation is ongoing, we believe that Bob Levinson may have passed away some time ago."

Levinson's family said in a posting on Facebook and a website: "Today with aching hearts, we are sharing devastating news about Robert Levinson, the head of our family."

"We recently received information from US officials that have led both them and us to conclude that our wonderful husband and father died while in Iranian Custody. We don't know when or how he died, only that it was prior to the COVID 19 pandemic," the family said.

The family said they did not know when, or even if, Levinson's body would be returned to them, calling it "the very definition of cruelty."

Trump called Levinson "a gentleman" and "outstanding." He added, in an apparent reference to what U.S. officials had told the family: "They've been making the statement to the family, I believe."

"It's not looking great, but I won't accept that he's dead," the president added. "They haven't told us that he's dead, but a lot of people are thinking that that's the case."

O'Brien added in his statement: "Iran must provide...